An Exercise of Astrometry with C/2011 L4 (Panstarrs)

On last March 3rd I took some photos of C/2011 L4 (Panstars). Here I present an excercise of astrometry using one of those images to extract some meaningful data from this observation. What I do here can be applied to any other comet image or, in fact, celestial object in the sky. My aim is to show a simple example of practical applicaton of mathematics and geometry in the determination of sizes of celestial objects.

My interest is:
A digital estimate of the comet brightness will not be attempted however, because this would involve a complex process of image calibration.

For that aim, we need:
I should also mention the need of a good sky simulator software (for all practical purposes I will use Stellarium, but other software could work as well). These are the 'inputs' of the work and the 'outputs' are described above, the physical dimension of the comet (at least an approximate value for this dimension).

Below I coment step-by-step all procedures that I used to find the final estimates. This exercise demonstrates a practical aspect of astronomical observation, something that is fully in agreement with the objectives of this blog.

I use the image publish on last March 4 2013 reproduced below. The image was acquired on March 3rd at 22:15 UT and it is an important input for the determination of additional parameters as we will see.

Fig.2 shows not only Panstarrs but also a star named HIP 117488 of mag. 7.0. This star was easily identified with Stellarium using the date and time as input for the skymap display. The apparente distance between the star image centroid and the 'comet nucleus' is about 40' (forty minutes of arc) - Fig. 3.
Then we calculate the distance in pixels on the image between HIP 117488 and the comet and find 355.1. Therefore the scale factor (Sf) will be

This is nearly 6" per pixel and corresponds to the final resolution of the image. Note that this value is the overall resolution of both the combined optics and camera setup.

The resolution above is a practical scale for the determination of the comet dimension. Using Stellarium, we find that at the observation date, the comet-Earth (observer) distance (D) was:

Therefore, each pixel in the image at the comet position corresponds to about 5400 km. The smallest pixel in the image, in particular the one corresponding to the "comet nucleus", is a square of ~5400 x 5400 km, much larger than the expected physical size of that nucleus.

3) Detail analysis of the cometary image

The image is in fact a matrix of intensities on an arbitrary scale (in a grey scale 8 bit image, the intensity goes from 0 to 255). If we extract a small portion of the original image (after converting it to grey scale), say, a square of 35X35 centered at HIP 117488, we get Fig. 4.

A 3D intensity plot of this image is shown in Fig. 5. This plot was made with Mathcad. What about the cometary image? I resampled the original image to 310 X 460 after converting it to greyscale and the resulting 3D intensity plot is:
The intensity of the coma region is close to 255 (the maximum) and should be compared to the 'background' level between 10 and 15. Another possibility is to ask Mathcad to plot the intensity curves (Fig. 1). The tail length in pixels as estimated using Fig. 1 is about 90.5. Therefore the (aparent) tail length is

The apparent tail length was small (nearly 1/3 of the moon diameter).
Fig. 7 is a zoomed version of Fig. 1. If we take the dimension of the coma region as nearly equal to que inner square (between 16 and 24 on the X-axis and 16 and 24 on the Y-axis), a good estimate of the coma condensation will span an area of 8 pixels X 8 pixels or almost 1'x 1'. This corresponds to sphere of ~50000km of diameter. However, if the outer intensity curves are regarded, the coma will have twice that size. Thus  the coma of Panstarrs was estimated to have an apparent size of 2'x2' or 90 000km of extension on last March 3rd.

It could be argued (with reason) that the estimated tail size must be corrected for the geometrical situation shown in Fig.8. The comet tail always points towards the sun (along the Sun-comet line), while we are observing the projection of this line on the perpendicular to the Earth-comet line.
Fig. 8 depicts the geometrical situation: the apparent tail length is a function of the real tail length and the position angle (alpha) between the Sun-comet line and the perpendicular of the Earth-comet line. Therefore, the real tail length will be

It is not difficult to see that, for the geometry of Fig. 8:

Now, again using Stellarium we have:

as the Earth-Sun distance and elongation angle for comet Panstarrs at the date, respectively. Therefore, using the above equation we find:

The real tail length in km (mi) will be

Compare this with the Earth-Moon distance (384 400km). There is no accurate definition of a comet tail (that depends on the density of particles such as dust, gas etc). What we can say here, however, is that, given the "definition" of tail as determined by the smallest intensity level on Fig. 1 (30.5), the real tail  extended itself for half a million kilometers in space on the date. 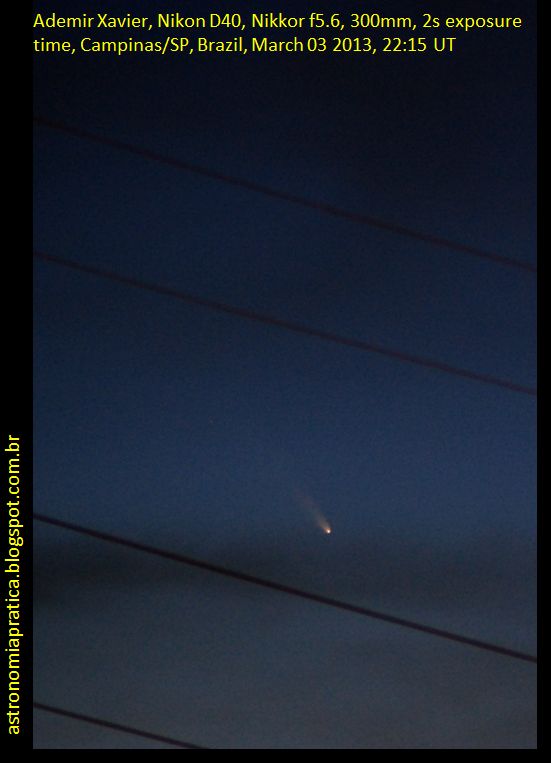 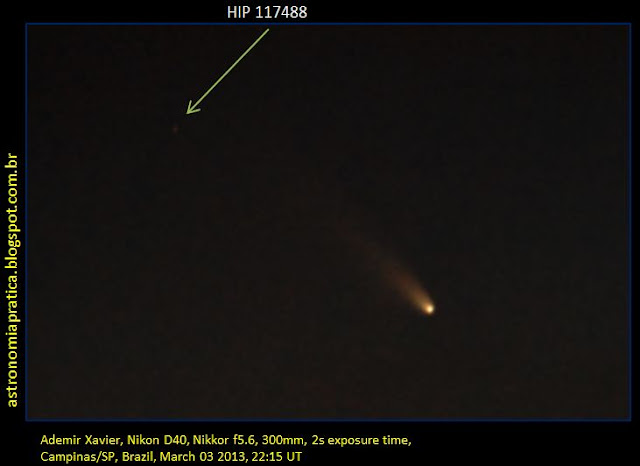 Ademir Xavier
Phd in Physics working for the Government and the space industry.